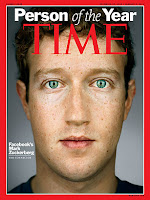 The Time Person of The Year for 2010 has been named and it's Mark Zuckerberg. Can't say this is a total surprise because of the incredible story that is Facebook. The Time article is full of great information and interesting images that help tell the story. The story begins with a description of the Facebook offices and the fact that no one, not even Mark, has an office. There aren't even cubicles. If you want privacy to make a call or have a conversation, you have to go into a conference room. This begins to paint the picture of the openness of the company. For a company only seven years old it is an incredible success story. There are now over 550,000,000 users on the service and they are adding about 700,000 new members each day. This is about 1 out of every 12 people on earth.

Mark, described as socially awkward, has
also been much discussed. When he is talking to someone it feels more like an exchange of data than a conversation. But those who are close to him see him as personable and friendly. At his age and with he has accomplished, it's surprising he has time for anything other than running and growing Facebook.

He is also extremely focused. He is a billionaire but he lives in a modest rented home, drives a modest Acura TSX and vacations in Orlando at Harry Potter World at Disney. On his Facebook page he lists one of his interests as "Eliminating desire". To me this shows who he is as a person - the money and fame are not the primary goal.

Overall this article is very well written and is full of great information. Printed out it's 15 pages and is well worth the read.
Posted by Waterhouse Weekly Graphics at 3:57 PM