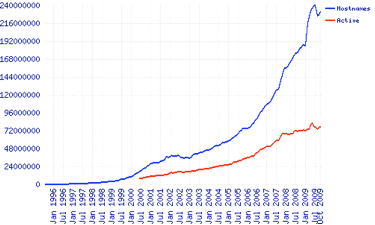 The internet is such an amazing tool and to think it is only a few short years old. I know the backbone is older, but the web we use is relatively new. In his blog, Tony Tjan talks about various mind-blowing stats of the internet.

There are over 200,000,000 websites today. That is a huge number. Not all of them are active. Some are only host names waiting to be sold, so they really don't count. In 1994 there were only about 5,000 sites. So in 15 years, the number has grown from 5,000 to 200,000,000. Tony has a chart showing the growth rate.
There have now been more than 5 billion tweets. Evan Williams one of the founders of Twitter was also the guy who coined the term "blogger" when he was with blogger.com. Google performs about 2 billion searches per day. Facebook and other social networking sites are adding about 700,000 new users per day. About half of the top ten internet sites are less than five or six years old. These are sites like YouTube, Blogger and Facebook.
This is so amazing because with the growth and the power of the internet, the opportunity to use that network and that reach changes the game of business. Instead of working with local companies it is possible to work with companies across the country and across the globe. The opportunities are endless.